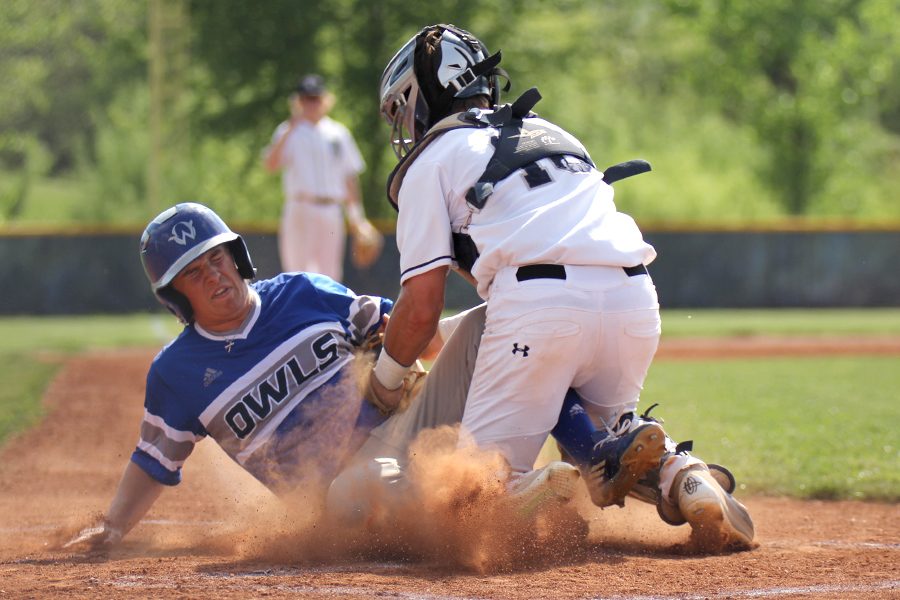 With the ball thrown in from the outfield, junior Ethan Judd turns and attempts to tag an Olathe West player out at home. The Jaguars defeated Olathe West 4-2 on Thursday, May 10.

The baseball team played against Olathe West on Thursday, May 10 and won 4-2. This was also senior night for the team, and the seniors were honored before the start of the game.

According to outfielder Will Morris, he and the rest of the senior players were looking forward to senior night in particular.

“We were very excited,” Morris said. “We’ve all been waiting for this for awhile, [and] just to get this recognition is awesome.”

The game started off fast with third baseman junior Cole Moore scoring the first Jaguar run in the bottom of the second. After that, the Jaguars scored three more runs, all within the first inning.

Going into the game, head coach Jeff Strickland felt confident in his players due to their performance at recent games and practices.

“We felt confident because our guys had won their past three games, and our practices have been some of the best of the year so far.”

After the second inning, Morris believes the team became more confident due to their 4-1 lead. He attributes the fact that Olathe West was unable to score anymore runs the rest of the game to a solid defense.

“I think we felt more confident throughout the game,” Morris said. “[The team] only made one error. It’s nice to get no errors, but with one error we can still usually win.”

Strickland was pleased with the team’s batting performance throughout the game and during the second inning.

“Offensively we were pretty solid tonight,” Strickland said. “I thought up and down the lineup we had a lot of good swings and [players] that valued each pitch.

Looking towards the postseason, Morris is confident with the team’s chances and remains cautiously optimistic.

“[This is] the most confident we have been [about postseason] all year,” Morris said. “I think it’s looking hopeful [with] the way that we are playing. The whole team feels that we could make it to state, [but] we’ll have to see.”

“I’m feeling very confident, and the reason I’m feeling confident about these kids is that they know how to work hard,” Strickland said. “That’s what’s going hopefully going to give them success in the postseason.”