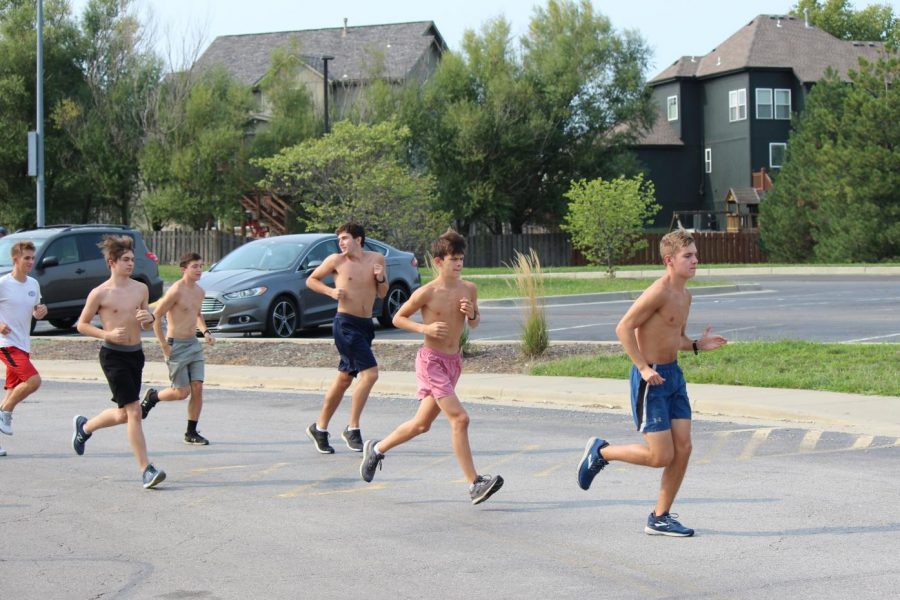 Gallery|5 Photos
Leading the rest of the team, junior Brendan Akehurst starts his run ahead of the others to keep a safe distance.

In the midst of the COVID-19 outbreak, many activities that involve contact or large gatherings have been heavily restricted or outright canceled. This leaves sports like cross country that aren’t high-contact sports in an unexplored middle ground.

Cross country meets would typically cram as many students as possible into a narrow chute at the start of a race and the cross country team would usually run together in large groups at practices, but restrictions that have been put in place this year to prevent the spread of COVID-19 have had a very large effect on the way that the team practices and the way that meets are organized.

To those who have spent lots of time in the sport like senior John Lehan, a varsity runner, the changes that have been made seem quite drastic, but oftentimes are less impactful than they seem at face value.

One of the biggest changes comes into play at cross country meets where athletes are required to wear masks for the first quarter-mile of the race. This makes the first 400 meter stretch of the race much more difficult than it would be under regular circumstances.

“Having to wear a mask for the first 400 meters and then throw it around your arms is a very difficult adjustment,” Lehan said. “Breathing through a mask while you’re running at race pace is not fun or easy.”

Fortunately, every team is disadvantaged by the same problem, so it doesn’t play as much of a role as expected when it comes to determining placements at meets.

“We are racing for positions and not time, so we aren’t particularly worried about it,” Lehan said. “It’s just an adjustment that we have to make.”

Many other measures are taken at meets to ensure safety for everyone and reduce contact between different teams. At some races, spectators and parents have not been allowed, the organization of the starts of races has been altered to put space between different teams, different races are staggered to minimize the number of people at the event at once and meets won’t have award ceremonies to prevent gathering a large number of people together.

Another large impact that the restrictions have made on the cross country team is the development of team culture. In a typical season, the team would spend time bonding and getting to know each other at team dinners, out-of-town meets and especially at practice.

When they practice now, the team has to split up into much smaller groups rather than running as one large group. According to Lehan, the measures put in place to reduce contact have also reduced the amount of time that the team gets to spend together and develop that team culture.

“We also have to maintain six feet of social distancing while we run, which can be hard to do because in the past we have run out in large groups,” Lehan said. “We used to be able to stop to stretch together after the first mile, but now we are stretching beforehand so we can stretch in masks. We are running out in smaller groups so we can maintain distance from one another.”

Head cross country coach Chris McAfee agrees that the restrictions have made it difficult to build team culture, which he links to making it more difficult to recruit new team members at the beginning of the year. According to McAfee, the team usually is able to pick up a couple of new members at the beginning of each year from recruiting, but that hasn’t happened this year.

“I think, more than anything, that the restrictions have made it a challenge to build team culture,” McAfee said. Our team culture and the connections/relationships we are able to create are really important in our sport.  Very few kids come out because they love to run and want to compete.  Without the relationship building, our numbers are down a little and I worry about the future of our program.”

Lehan and McAfee both agree that the biggest detriment to the team as a result of the hybrid schedule is that athletes are less likely to get up, eat healthy meals and go to bed at a reasonable time due to a lack of accountability on the days that they aren’t in school.

“Athletes need a regular sleep schedule and our kids need to fuel for practices. Otherwise, they will not perform well.  That is the largest, most significant impact I see,” McAfee said. “I am worried about decreased performances and injuries because athletes are not taking care of their bodies effectively.”

Lehan shares the same sentiment when it comes to the impacts of the hybrid schedule. Lehan said that “the biggest challenge from the hybrid schedule is convincing people to stay on a normal schedule on the days that they don’t have school,” but other than that doesn’t believe the hybrid schedule has any negative impact on the team’s performance or ability to practice.

The large degree of uncertainty hovering around the seasons of many fall athletes may have made them nervous, especially graduating seniors. Lehan thinks that despite the mental toll that the questionable future might take on athletes, overcoming the challenges at present will help better prepare them for sports in the spring.

Lehan is hopeful that the challenges of this season will only make them better in the future. With sports like track and cross country, dedicated runners are basically running all year-round according to Lehan, “so everything that we do now is going to affect us at later stages.”